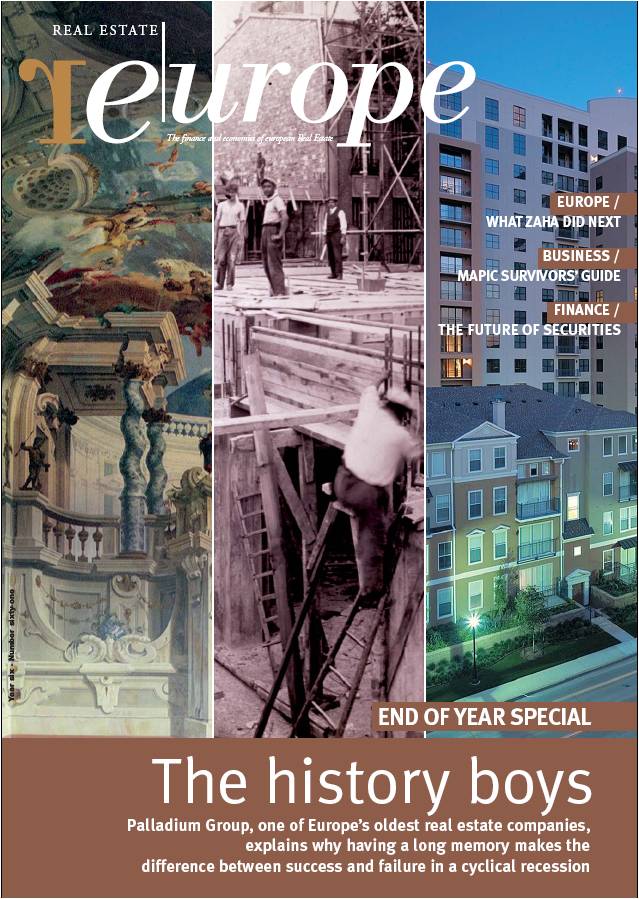 Palladium Group, one of Europe’s oldest real estate companies, explains why having a long memory makes the difference between success and failure in a cyclical recession

This article begins with a story. A General Contractor completes some prime real estate in Paris for an important client, to spec and on schedule. But there’s a problem. The economy is suffering in one of the worst downturns seen for years and now the client can’t pay. It’s a potentially disastrous situation, but the General Contractor turns it into an opportunity by seizing the chance to evolve: he decides to be a property owner and keeps the asset, starting out on the long road to becoming a modern developer in every sense of the word. This story didn’t take place in 2009. It took place in 1929, and was the making of Palladium Group, this month’s cover story and one of Europe’s most intriguing and historic real estate companies. Palladium found opportunity in adversity back in the Depression which tore apart the economy in the last century, so it’s no surprise that they’re doing it again in the current credit crunch.

Cesare Rancilio is the President of Palladium Group G.E.I.E. but he’s coy about his title at the start of our interview. It’s all part of the ethos of a group which has grown organically, on the shoulders of a strong team which now covers half of Europe. Mr. Rancilio explains: “In our group we prefer to not underline individual roles, because we have a management approach in which there are managers of a certain level, working in any case with the committee and the various companies underneath that work in a similar way. Our system is structured to favour shared decision making. My role is President of Palladium Group GEIE, a Europe structure of economic interest, which coordinates the activities of the different branches and works with the companies outside Europe which also have signed agreements with us.” Palladium may be one of Italy’s most historic real estate companies, but its backstory evokes some poignant moments in European history. “We started in Milan in the mid 19th century, in the key period of industrialisation,” says Mr. Rancilio. “We were instrumental in building houses for the people in this period as the cities grew. By the 1920s, we had also expanded into France, following the destruction of many towns along the border with Germany in the First World War, and we worked on rebuilding them as a General Contractor.
We also worked in Paris at that time, where we started to become real developers in the modern sense of the word and we also moved into the arena of property ownership and management. It’s actually a rather curious story, as in the wake of the crisis of 1929, we were left with buildings after clients failed to pay us. Obviously at the time it placed the business under stress, but in hindsight, it was not a bad thing – we still today own buildings in Paris which were built by us in the late 20s,” he explains. Palladium Group went on to find opportunities in the South of France during this period, as well as continuing its activities in Italy. But the appetite to grow crossborder remained. ‘Towards the end of the last century, in the 1980s, we started to work in Belgium established our Brussels office, and also opened in the Netherlands. We went into the States in the late 1980s and early 1990s during the property crisis, and decided to head for Texas, because it was the first state to show signs of emerging from the 1980s’ recession. We also went to Berlin in that period, and today we’re also active in London and the Middle East, where we are studying some exciting opportunities, particularly in Saudi Arabia.”

Palladium Group today pursues its international business with a number of different activities, seeking major development or redevelopment opportunities in its target urban markets. Preferring significant and complex projects including a residential component, Palladium has carved its niche with a highly specialist approach. Its schemes include mixed-use “synergistic living” projects including residential components combined with combinations of hotel, retail, entertainment and office areas. Palladium also tackles value-added renovation and rehabilitation projects for residential and commercial buildings. But the group equally does not shy away from mid-sized projects, frequently tackling schemes that cost less than €50m, if they tick the right boxes in terms of specific local market conditions, portfolio management objectives, or perhaps because they demand design and technical expertise, for example in the rehabilitation of historical buildings. For Palladium, being a good developer naturally also requires excellent management skills, as Mr. Rancilio explains. “A large part of our business comes from our rental tenants, as property landlords, which is an important business segment for us particularly in times of global or regional financial crisis. Of course, we also manage buildings, so our geographical focus in the countries in which we are present is crucial to do that job well. For example, in Germany, we focus on Berlin; in Italy, we’re active in the north; in the Netherlands, it’s around Amsterdam. It’s important for us to be present in the big markets which enjoy a lot of activity. Our management companies are present in all those locations where we have properties, to guarantee that we’ll manage well – not only for ourselves, but also for the benefit of our clients. We are also developers, with a knowledge of construction stretching back in time, and strong technical and financial skills. There’s also a sales team – another area of the business that we take personal responsibility for. We don’t pursue all these activities in all of our offices, but do in the principal ones.” Palladium’s asset management business isn’t just about keeping tenants happy, of course; it’s about keeping financial objectives on target. The management tools used are amongst the best available in the market, including the systematic analysis of yields and cash-flows by building, partnership and portfolio. Debt financing, usually provided by local banks, is geared to balance the need for returns with sound risk management practices.

Palladium makes this expertise available to institutional and private investors, generally backed by equity participation from the Group to ensure consistency of objectives. Investment proposals are adapted to the strategy of each investor, including yields and risk profiles. If 2009 has been a peculiar year, Palladium hasn’t been affected as greatly as some of its rivals. “Our property management business isn’t suffering at all in the crisis – actually, it’s going very well, even if we have been obliged to adapt rent levels in some countries (such as in the States, also in some parts of the Netherlands),” says Mr. Rancilio. “Owning is not really a problem, though, in this crisis. We are developing less overall, however, bearing in mind that the crisis started to bite in the summer of 2007 particularly in the States. It arrived a little later in Europe, but has dampened sales figures for us. The situation is that the development market hasn’t completely come to standstill, but has slowed considerably. It’s not a big problem, as development is only one part of our business, and because we often work with development partners.” Palladium also pursues a line of business which is somewhat removed from economic cycles – it has an interest in cultural real estate projects. Mr. Rancilio explains: “30 years ago, Palladium Group organized a new initiative near the Bastille quarter in an old factory of around 3,000 sq m which we transformed into a cultural centre, called Kiron. Kiron (or Chiron) of course was the “good” centaur from mythology who taught the arts to Achilles. It’s also an international name which resonates in a number of languages, so it was a good name for the project. At its inception, we put together under the same roof a number of arts such as theatre, a dance studio, a visual arts gallery, radio, television and a book publisher, publishing around 30 books a year.

We also have a recording studio, perform live concerts, and there are also spaces for the technical arts – it’s a very rewarding space in which all these arts and cultural forms can live together. It was born in an important time, when the world of culture wasn’t so broad perhaps and represented a really interesting development in Paris, as it still does today.” Palladium’s commitment to culture and the arts also extends to its home territory. “We also had an approach to do an artistic project in Milan,” says Mr. Rancilio. “Villa Arconati in Castellazzo di Bollate is a huge structure on 200 hectares, plus a park with sculptures; the Villa itself is a very beautiful, imposing place which was in need of restoration. It’s also relatively near to the new Fair and Congress Centre in Rho. We used our experiences of Kiron here to create a cultural centre in collaboration with the local council, to make a meeting place and artistic home with important common areas. Thanks to our experiences with Kiron it’s an exciting and enjoyable project for us, which we’re putting all our heart into.” There remains one question to ask: if Palladium became a property owner in the 1920s in a period of crisis, how are they making the most of the current credit crunch? “Periods of crisis are also periods of opportunity, of course,” agrees Mr. Rancilio. “Now in Miami for example – a market we like to observe – there are areas there with very important opportunities.

Its not quite the same in Europe; in Paris there are few really good deals to be made, but London, where we’re also looking, is a very interesting market at present. The same can be said of Spain, where Barcelona and the south coast are markets worth looking at. But that doesn’t mean that it’s the correct time to buy – you still have to find the financing and make sure you’re doing the right deals.” He adds: “Elsewhere, developers who are running into difficulties are also disposing of assets and land, but these situations need close and individual attention. Residential building is a different kettle of fish in every European country, and we have to stay aware of the differences, but we enjoy being flexible and working with local architects to realize projects in different territories.” For Palladium, that also means having the belief to continue to look at new countries. “We’re not afraid of looking further afield. We’re very excited about prospects in South Arabia, where there’s an enormous demand for apartments. The population there is demographically very much on the young side, and there will be huge need for housing there. But good opportunities are as much about self restraint as acting. In terms of Europe, we have looked at Central and Eastern Europe in the past, but we’ve never acted on what we’ve seen. I’ve been to Prague perhaps 20 times, Moscow, Warsaw… but you can’t do everything and as of yet we’ve not had an opportunity which has really inspired us to go there. Now there are some other exciting global shifts which are on the horizon from India to China. We are looking at possible developments in all those markets though so we will have to see what 2010 brings!”